Pike’s Peak is an icon of Colorado. The name goes way back to the early history in the 1800s to Zebulon Pike. Visible far out onto the eastern plains of Colorado, over 100 miles on a clear day, it acts as the welcome-matt for the Rocky Mountains. It also provides the backdrop (pictured above) to Colorado Springs. 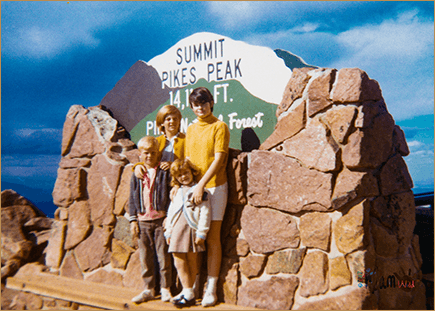 We enjoyed the many tourist activities such as taking the tram to the top of Pikes Peak (pic left). Although our stay was short -- due to the nature of father's job on the railroad -- the experience would never be forgotten. Colorado became very high on my list of cool places to live.

When it was time to go to college in the early 80s, we were living in Iowa and I attended the state university there. I had always been a bit of a science nerd and I enrolled in engineering. It turned out to be a difficult choice, but I persevered. In the final years of school, I met a girl. Luckily, she too had lived in Colorado and planned to return. In fact, she was adamant that she wanted to go back! Well, that suited me just fine. So as our relationship grew and as graduation slowly approached we took a visit back together. After that visit, we fell in love. From that point on we jointly hatched a plot to return to our Colorado.

After working a few stents as a co-op student and gaining a little experience in my chosen field. I asked my Colorado girl to marry me, and she accepted! The summer following graduation, we made our move. One of my best friends at the time, Marty, agreed to pull my RV trailer out to Colorado Springs. After getting me settled, my fiancée returned to school to finish her final year and I was on my own.

By the end of that first summer I was alone in Colorado Springs except for a puppy that my fiancée and I had obtained at the dog pound. I named the dog Pike, after the mighty mountain Pikes Peak that I was encamped nearby. Up until this point, I had never climbed a mountain. Although I was a flat-lander, I was also a young man who could do whatever he wanted. For the first time in my life I was on my and own out of school. I had a great fiancée, I felt like I had it made!

With some time in my hand on my hands, I began taking my young puppy out on short hikes. Since I was very interested in Pike’s Peak the pup and I began to walk a short distance up the Barr Trailhead. Often, we would see people hiking out and if they didnn't look too tired, I would ask them how it was up there. I thought all those people coming down were like rock stars. They looked at peace with themselves and the world. I so wanted to be like them. And this is where I got the bug to climb Pikes with my dog Pike.

But things were moving fast. A serious engineering job offer came through and off we were for the Denver metro. With a real paycheck, the trailer was exchanged for a condo rental near Boulder. My lovely city of Colorado Springs and my favorite mountain had been left behind a second time but now, thankfully, they were still relatively near.

After a few months saving up for a pack and some mountaineering basics, my first peak would indeed be Pike’s Peak. Anyone with basic backpacking experienace and good physical health could give Pike’s Peak a try. The climb is relatively non-technical although it’s a long hike, about 13 miles. Another consideration is that it has the largest elevation gain of any 14teener in Colorado, over 7000 feet. So, don't be fooled, this is a substantial mountain and you need to be comfortable sheltering in your own gear during weather changes while far from shelter.

They always say that the first three in the last 3 miles of Pike’s Peak are the same. And there’s a lot of truth to that. The first three in the last three are relatively brutal with elevation gain and switchbacks. Seemingly unending. In between is a large stretch with a more modest gain. It was climbing this mountain that I ended up having what I called my Pike’s Peak knee and I began to learn right there that the mountains were much stronger than our bodies. And that if we wanted to climb mountains we needed to pay attention to our bodies. We needed to listen and be aware of feedback. Generally, this feedback was provided as pain. And so being able to address pain with offsetting measures a.k.a. first-aid, is another skill that is required.

Pikes Peak overview. Get a good close look at it!

There is much more to say because so much started at this border between child and adult. For myself anyway, I became an adult when I graduated from college. Prior to that time, I was a child. It was at this point that I knew I was "all in" on Colorado and that exploration and adventure was going to rule my life forever. This is my story.

I chose to live a life of exploration and adventure. I feel happy to be alive today inorder to share my tale. Currently I'm too decrepet to r0am very far but I love to share my experiances both mild and wild. I hope that others like myself may benefit from viewing these pages. Remember, if you don't survive the adventure to tell the tale -- it wasn't worth it. Honor our precious natural resources and all our fellow living plants and animals.